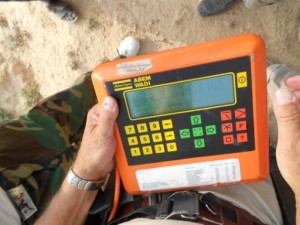 When the primary radio waves, emitted by radio stations, hits conductive formations in the bedrock, cause by induction secondary radio waves. The electrically conductive formations may be concentrations of certain ore minerals, major water-bearing fracture zones in bedrock or karst weathering in the limestone bedrock in Somalia. With the help of a special radio receiver (in this case WADI instrument with a memory of 4000 measurement registrations) can sound out the mode for an electrically conducting geological formation and thus with relatively high accuracy indicate the location of an aquifer formation.

The strongest radio stations have a primary extension of up to 90 000 kms. For measurements, selection of all transmitters must be done to choose the one with the highest strength in the actual area. 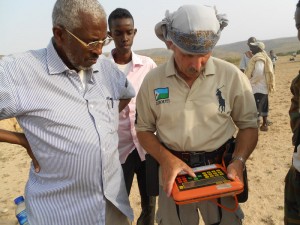 Examination of the measurement results, (Yusuf Muhammad, water engineer Somalia and B. Fogdestam).